The Shepherd from Traquair:

Genealogy research is best done by starting at the present and working backwards in time, proving each generation with actual source records that are reliable.  Following this rule I had traced our family back to a William Scott who's death registration stated he had died at Selkirk, Selkirkshire, Scotland in 1855.  I must explain that 1855 was the first year that reporting births, deaths and marriages in Scotland became a statutory requirement. This was very fortunate for me because this 1855 statutory death record held much more information than the Old Parish (Church) Records system provided in previous years.  Amongst other things this death record listed our William Scott's place of birth (Traquair Parish), his parent's names (William Scott and Euphemia Smail) and his father's occupation (Shepherd).  The death registration also recorded William's age at death at 76 years which puts his birth sometime around 1779.

The old Scottish naming tradition held that the first born male child would take the name of the father's father, the second was to take the name of mother's father, the third would take the name of the father, and so on.  Women weren't left out as the naming tradition explained how to name female children as well. I can report that our family's ancestors certainly followed this tradition as for the next several generations each had named their first male child William.  I haven't yet found any other children of William Scott and Euphemia Smail but if they had more it's a good guess that their William born in 1779 was one of their first.  This is worth guestimating because it also suggests that William and Euphemia were likely aged between 20 and 30 years at the time of this child, which would put their births between 1749 and 1759....which for the sake of perspective of my Canadian relatives, was over 100 years before Canada became a nation.

Learning this and much more from a single record was a testament to how valuable Scottish statutory death records are for those researching their family history.  However, I didn't realize just how fortunate I was to find my ancestor's death recorded on this new form until an Archivist at ScotlandsPeople Centre in Edinburgh explained that William's specific 1855 death record was on a form used only for a couple of months and in only a few counties before it was discontinued in preference for a shorter, less onerous form and therefore a less informative form.  Therefore I was lucky in more ways than one to have uncovered our earliest known direct ancestors, the Shepherd William Scott and his wife Euphemia Smail, who lived in Traquair Parish during the latter part of the 18th century.

Traquair Parish is in  Peeblesshire which is one of the 4 counties that make up the Border Counties of Scotland, the others being Selkirkshire, Roxburghshire and Berwickshire. The largest town of Peebleshire is its namesake Peebles, a picturesque village built along the banks of the beautiful and historic Tweed river. Follow the Tweed to its easterly conclusion at Berwick and you will have enjoyed some of the most beautiful scenery in all of Scotland.

We visited Peebles for a wonderful week in 2010, using it as a central jumping off place for our daily tours around the Borders. We rented a small flat in a lovely terraced building on the bank of a stream tributary of the Tweed near the heart of Peebles.  Our stay there was made even more memorable when my new found cousin Jean stayed with us for a few days of ancestor hunting in the Borders. 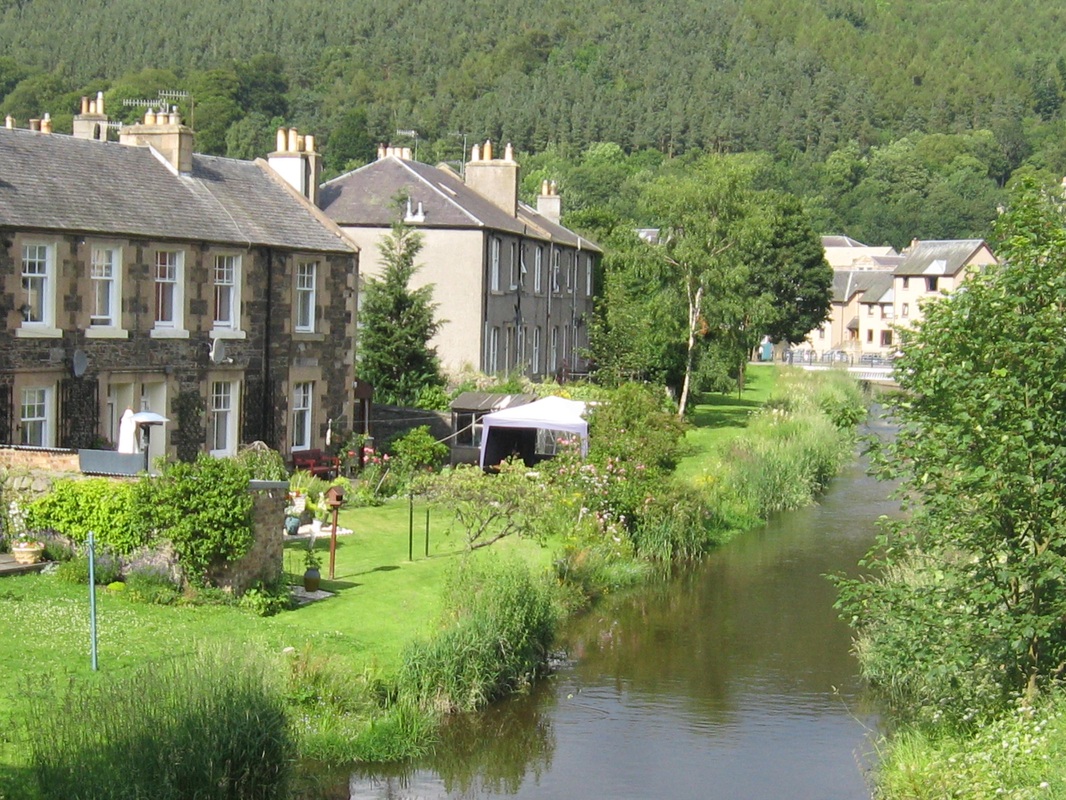 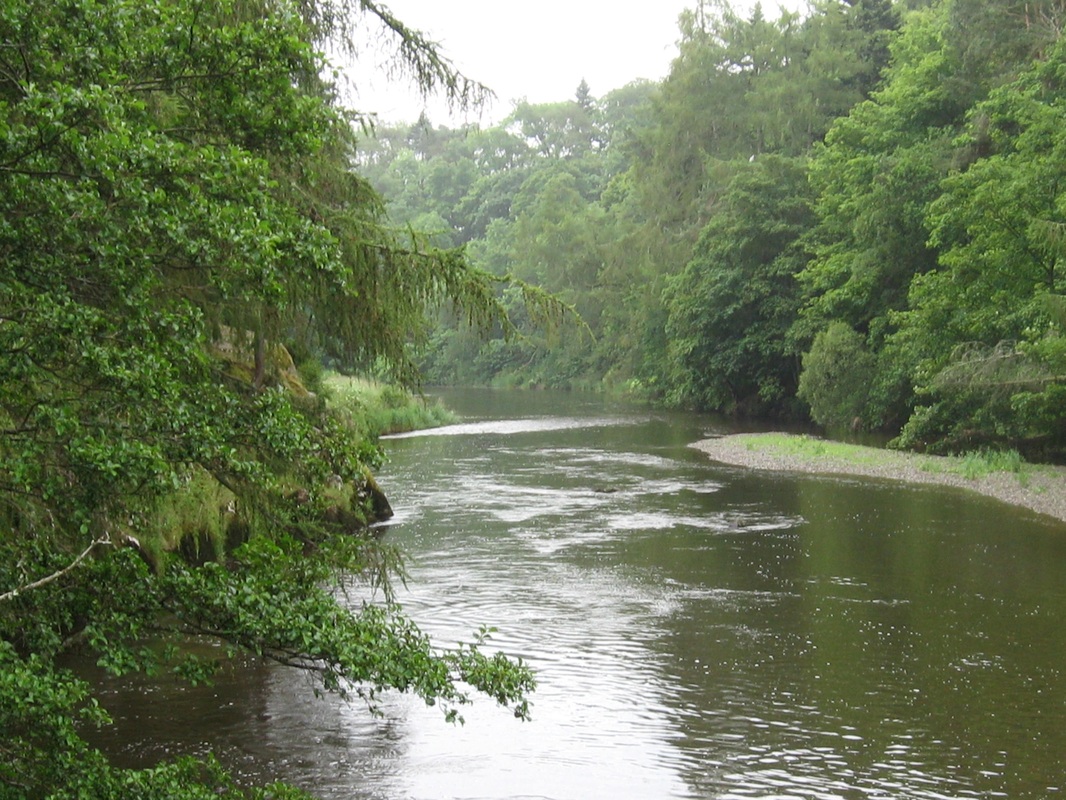 The beautiful Tweed water near Peebles. 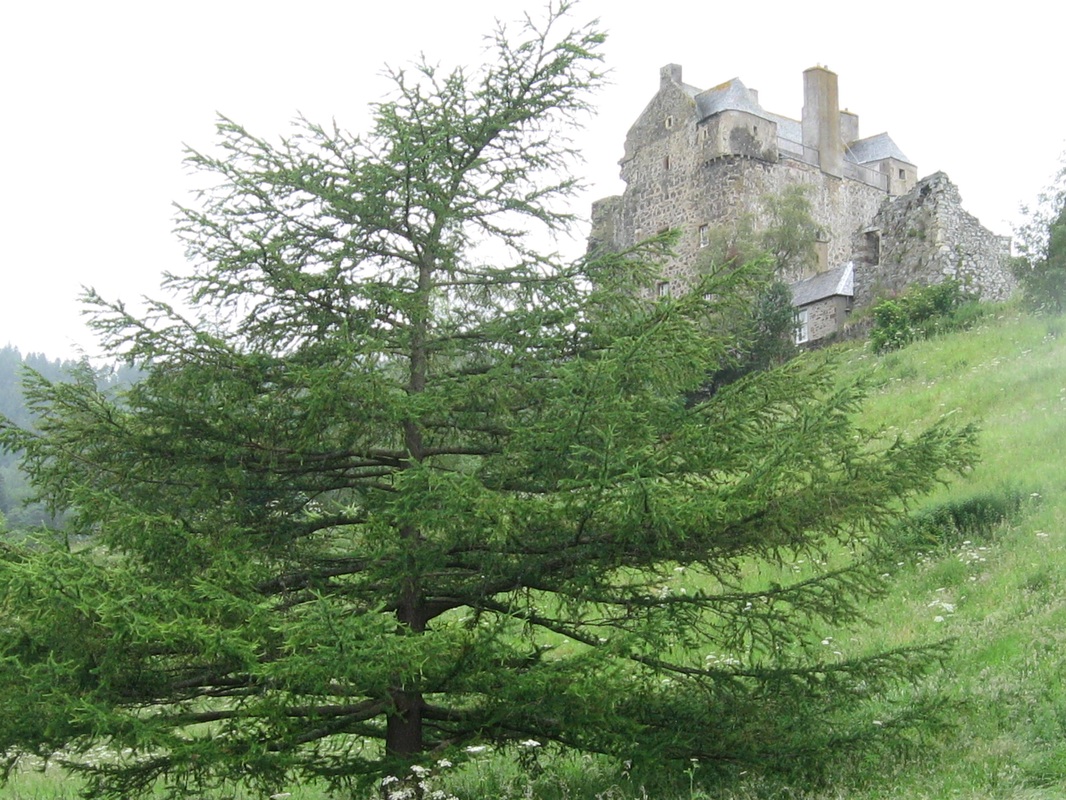 Neidpath Castle well perched on the banks of the Tweed near Peebles.
To find Peebles on the map below first locate Edinburgh then head south about 20 miles on the A703.  Heading eastward from Peebles on the A72 are the 19th century textile mill towns of Innerleithen, Galashiels and Selkirk, where many of our long lost cousins worked and lived during the woolen mill town years.  Just south of Innerleithen is where you will find Traquair Parish, on the B709 road that heads towards St. Mary's Loch in the Yarrow Valley.

If you plan to visit the Borders one day then provide the time for a visit to the historic Traquair House which dates back to 1107 and is considered to be the oldest continually inhabited house in Scotland (see:  http://www.traquair.co.uk/).  Nestled in the middle of what was at one time the vast Ettrick Forest, Traquair was perfectly suited for its original purpose as a  hunting lodge for Scotland's Kings and Queens.  Although this may portray a picture of tranquility for Traquair I must explain for my Canadian cousins that this was still the border country with England and for the next 600 years it served as the battle ground for a long list of righteous purposes that ensured the citizens of the area were subjected to an impoverished and wretched lifestyle by any standards.

By the time the Stuart Prince Charlies were leading their rebellions (1715 and 1745) the hill country in the Borders were already moving out people and moving in sheep. Although not as violent as the later Highland Clearances the effect in the Borders was the same it was no surprise that since our William had remained in the area we found him occupied in the sheep industry - a shepherd.

Before I leave the subject of Traquair I want to state the obvious and confirm that Scott is a very historical Clan name in the Borders, a name that can still be found often in the Borders to this day.  I bring this up because I want to explain that there have been very few Smail families in the Borders over the past couple of centuries. So few are the Smail families that it surprised me to find that a primary tourist attraction of the Peebleshire area today is the Robert Smail Printing Works located in the village of Innerleithen.  Now owned and operated by the National Trust of Scotland the print shop was established in 1866 by Robert Smail but I haven't yet found a connection between him and our Euphemia.

If you visit Traquair today I certainly encourage you to visit Traquair House.  After your tour of the house head southward towards the Yarrow Valley on the B709 and you will quickly came upon a small group of houses and Traquair Kirk and Kirkyard. 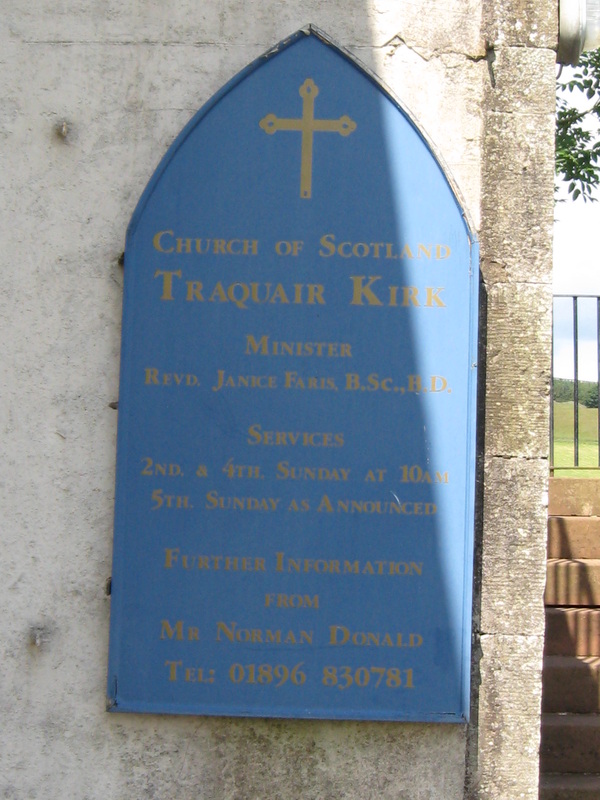 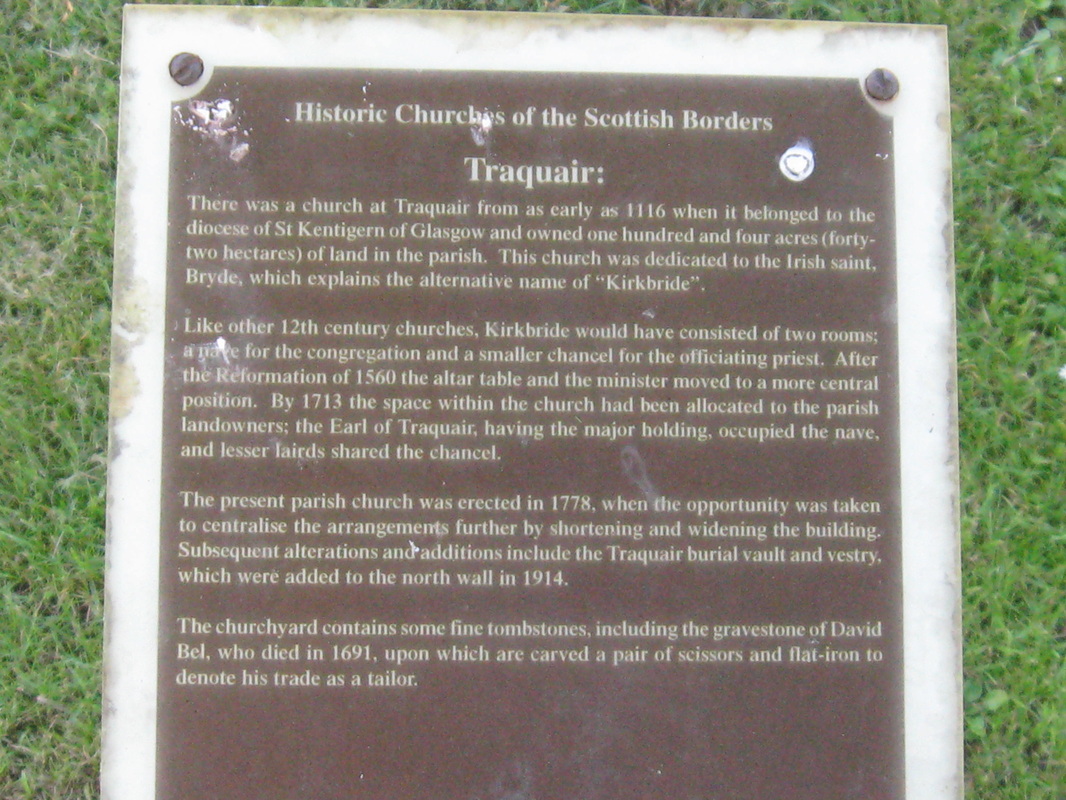 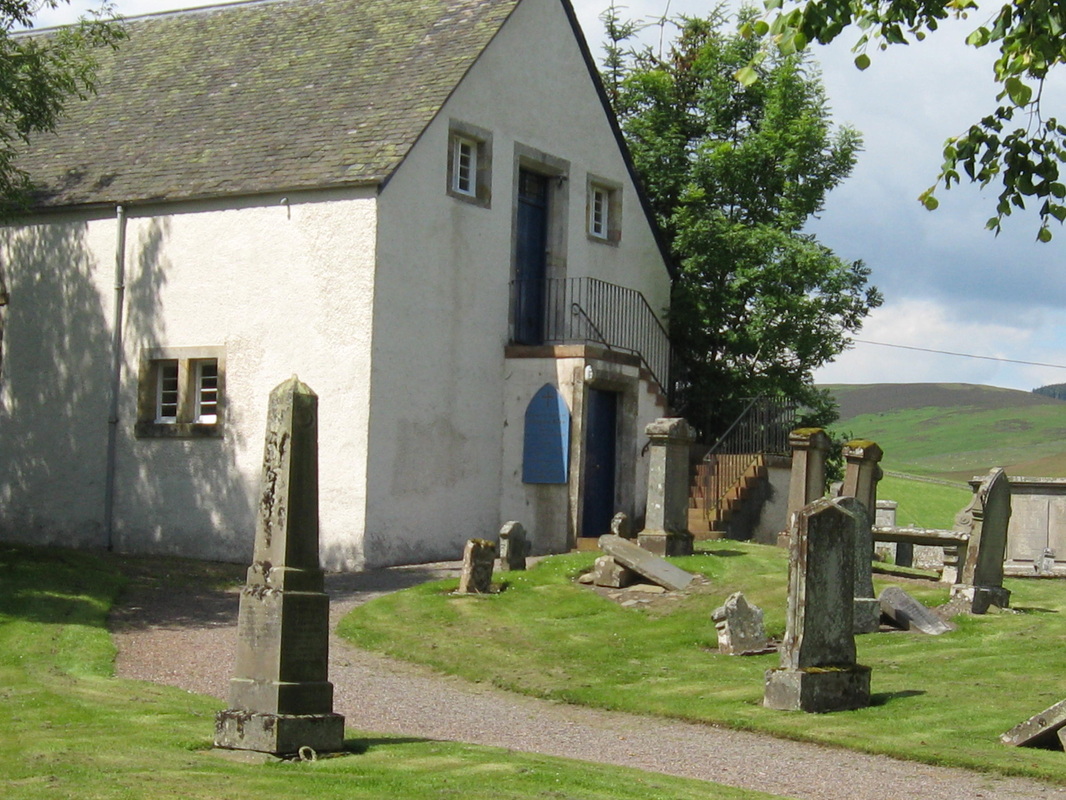 Traquair Kirk, 2011.
Continue your drive south on the B709 and you will next climb into Minch Moor and the other nearby hills where our shepherd would have tended his flock.  To give you some sense of a shepherd's meagre living conditions during the late 1700's click on the link below and scroll down to the photograph that shows the cottage of a shepherd named Jaimie Tait who lived in neighbouring Dryhope Haugh till the late 1800's.  Mr. Tait's cottage was typical of the farming cottages found in these parts and therefore it's probable our shepherd lived in something similar:   http://heritagehub.tumblr.com/post/1091447160/emigration-in-1848 .

Scotland's famous novelist, Sir Walter Scott, grew up in nearby Ashetiel (before building his famous Border home called Abbotsforsd House - see http://www.scottsabbotsford.co.uk/ ) and walked these very hills collecting stories and poems about Scotland's past from the local characters he met along the way.  Sometimes joining Sir Walter on his well documented walks was his dear friend and colleague, James Hogg, the poet known as "the Ettrick Shepherd".  Hogg was born and raised just over the hills to the south of Traquair and down into the valley of the Yarrow Water at Mount Benger House.  As these authors lived in same hills as our shepherd and during the same years I picture them meeting our shepherd as they strolled these hills.  Maybe our shepherd even provided Scott with some stories of his own.

I recently found a very old etching of a shepherd in the Traquair hills that depicts the very years our shepherd tended his flock there.  The etching was published in one of Hogg's books, titled "Works of the Ettrick Shepherd".  The image portrays a shepherd and his dog standing guard on their flock in a beautiful and tranquil setting.  It's the closest thing to a photograph of our shepherd that we'll ever find.  Rather than thinking of the danger, poverty and hardships our shepherd most assuredly had to endure I prefer to think of a more tranquil life that he and his wife would have enjoyed in the hills of Traquair: http://www.graven-image.co.uk/2010/10/traquair-scottish-borders/.